Long Lost Art or Ever Evolving System of Writing

Since people have been collecting in groups, we have been scratching out stories on anything we could find. The earliest days saw a lot of denting and chiseling on bone or shells, using anything with a point to help make our points. This expanded to the use of inks and powders and eventually we built reliable ways to make paper. Over the next few thousand years of exploring how to communicate, we discovered flowing lines do a lot for the human mind.

Calligraphy holds an innate beauty that calls to something greater within us. Touching both our rational and emotional sides, the flow of the shapes conduct far more than the information held in the script. Beautiful writing has been used to great effect by people from every stretch of the globe. Pretty much anyone who was writing stuff down was using aesthetics to further their point.

Calligraphy, as a practice with brushes, originates during the Shang dynasty in China and came to great prominence during the Han dynasty (206 BCE – 220 CE). Today there are three main branches of calligraphy: Eastern, Arabic and Western. They each have specific tools used in their creation, but they were all developed for the same reason, to add importance to text. In fact, in China, calligraphy was seen as one of two high arts, alongside painting.

Beautiful lettering spread from the east and was influenced by each region as it moved. Both India and Persia had extensive effects on the medium, as did Rome, Turkey and Greece. By the Dark Ages the Celts had left their mark and the Goth’s would do the same during the Middle Ages, though they were more somber than the delightful curves of the previous eras. During the renaissance there was renewed interest and investment in all things art, but there was trouble brewing for scribes.

Oddly enough, it was not until the 1600’s with the invention of the printing press that the word ‘calligraphy’ comes about. Until this point there was no handwriting, there was just writing. It was the scribes put out of work by the printing press that pushed the art of efficient, attractive lettering forward. Scribes realized the opportunity to make handwriting an artform and heavily influenced how we view calligraphy today. Fun Fact: scribes of old are still influencing modern times – our free SCRIBZEE app was named after those brave souls. 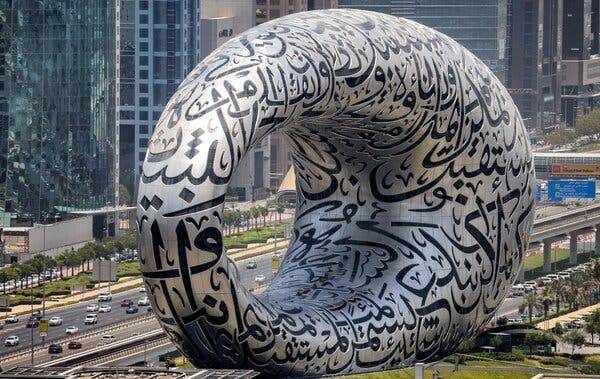 "Words of hope, in Arabic calligraphy, were incised into the building’s facade and matched precisely in its interior walls." - NYT

It should come as no surprise that expansion of writing and calligraphy followed religions very closely. Much of the early writing we find focuses on religious texts. Stylized letters were of the utmost importance to covey ideas in the Hebrew Torah and Muslim Qu’ran. Powerful, boxy letters are tell-tale signs of Hebrew script, while the relative thickness of down stoke as opposed to up stoke distinguishes much of Islamic writing. In many ways stylized letters morphed along with climate, resources, and scarcity. Case in point: Islamic texts from a prosperous era employed such large lettering, there were three lines per page. In contrast, after decades of war and strife made paper (velum) supplies scant, ‘miniscule’ lettering was introduced, and has seen wide usage. Fun Fact: Hamelin Brands began as a velum producer 150 years ago.

It should also come as no surprise writing and lettering followed trade routes. Branding and Advertising were not so different 2,000 years ago; you never know whose eye you will catch with interesting lettering on your packages. People that make a good product want other folks to know about it. Understanding that humans are both emotional and rational beings, a smart entrepreneur will ensure their labels are distinguished to show they have a worthy product inside. If you cannot decipher the messages written in Arabic or Greek, you can still gain perspective on the dedication required to emblazon such lettering thousands of years ago.

Calligraphy’s popularity, much like its flowy design, has ebbed and flowed through time, but still conveys the power of the earliest writing. Simply put, there is music in the shapes, a boldness conveyed that is unlike that of standard scripts. Perhaps that is why calligraphy, and its variants are used so widely in modern advertising. There are whole industries reliant on calligraphy artists. The wedding and invite industries have seen rapid expansion despite the growing cost of paper and hourly wages.

Both the present and future are bright for calligraphy. Despite its low point in popularity during the Industrial Revolution the art form made a resurgence in England during its Arts and Crafts movement of the early 20th century. Thanks to an abundance of pens and paper, a wave of calligraphic desire swept the US in the 70’s. It was from these recent advances in popularity that we see much progress and the shaping of our digital typeface.

Thanks to the internet, calligraphy is thriving in the digital age and creator-to-client contact is more efficient than ever before. For example, Hamelin’s new calligraphy blogger, Amelia Yin, started in 2020 and is already well known in her field. She seeks inspiration online from Pinterest and other creators like @pretty.and.pages, @kjpages, and @chanti_schreibt. Amelia says taking classes when she was younger was important for her development. Be sure to check out Amelia’s page at: @AMELIASTIKTOK

It seems the further we push into set fonts and automation, the demand for calligraphic arts rises. Employing calligraphy is a surefire way to distinguish yourself from your peers. Joy Kelly of howjoyful.com says writing and calligraphy are extensions of gesture, and that we use them, “as a way to make motion visible, memorable and lasting.” Whether its official documents, prestigious events or your favorite tattoo, calligraphy touches our lives in many ways. Thanks to the digital age the opportunities of a professional life in the artform are closer than ever. Though it is difficult to gain notoriety, there are numerous ways to develop yourself into a hired pen. With a little digging you will find online courses and reference books that will give you the support you need to get started. Fun Fact: some of the online courses are put on by global artists like Achyut Palav.

It is said, persuasion is not made by destroying the mind, but by transforming the heart. If that holds up, calligraphy, with its attractive flourishes, should be added to your list of skills. Start practicing today using a hamelin notebook. Our smooth OPTIK PAPER TM is the perfect canvas for your ideas. With durable construction you can be sure your work is safe and with the free SCRIBZEE® app, you access your files anywhere (thanks Scribes!).

Learn about OPTIK PAPER TM
Shop Notebooks
Back to blog